Penguins are adapted to their natural habitat at the ocean: They can spend long times at sea, are quick and efficient under water and have the necessary warmth insulation for the living in water and at land. The adaptions of the auditory system are not fully known. Like all birds penguins have no outer ears and only one ear bone (Columella) – mammals have three instead.

Penguins have to deal with a high range of sound volumes, they have to hear extreme loud noises, for example the break of glaciers and very quiet sounds to recognise far away predators. There are also a lot of acoustic influences by humans, but the effects on the penguins are unknown. There is only one study about the audiogram (figure of the hearing limit in different frequencies) of three African penguins Spheniscus demersus, which are only for in-Air hearing.

To create a forecast about the effects of underwater sound on penguins we need more basic research data and have to develop a non-invasive method to sample the hearing in penguins. In cooperation with the Zoo Odense in Denmark and the Marine Science Center in Rostock we investigate the hearing of different penguin species. The animals – partly our own hatchlings – will be trained with psychoacoustic signs and with the help of positive reinforcement. We want to develop methods, which are useful for in-situ research in air and in water. Furthermore the Museum of Natural History in Berlin develops tools for the scientific communication in the department of under water noise in the antarctic. The project wants to sensitize the public for this problem.

The study "Hearing  in Penguins" is funded by the German Environment Agency (UBA) with means of the Federal Ministry for the Environment, Nature Conservation and Nuclear Safety (BMU). In the Antarctic penguins, but also whales and seals are protected against disturbances by under water noise and other anthropogenic influences by the Antarctic Treaty.

Article of the UBA: How well do penguins hear?

What are the sources of noise in the sea? Why is human-made noise so threatening to marine animals? And how can underwater noise be reduced? This explanatory film on the subject of underwater noise was produced as part of the "Hearing in Penguins" project.

Sounds with different intensities are played to Gentoo penguins via under water loudspeakers. Observations show that the animals get frightened with increasing volume and swim away from the loudspeaker. 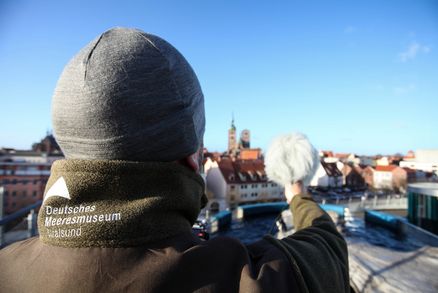