As part of the science communication initiative for the international project "Hearing in Penguins", the German Oceanographic Museum Stralsund, the Museum of Natural History Berlin and the German Environment Agency announce the release of a educational clip on underwater noise.

The German Oceanographic Museum in Stralsund has been raising awareness of underwater noise pollution at its OZEANEUM location for several years. Exhibits in the museum illustrate how increased anthropogenic noise can threaten and degrade the habitats of marine animals. "Many marine animals, in particular whales and dolphins, use acoustic signals for foraging, mating, navigating, communicating and for protection from enemies. But marine animals are increasingly disturbed, harassed and injured by man-made noise," says whale scientist and museum director Dr. Harald Benke. The animated educational clip, which is available in German and English, introduces the main sources of underwater noise and understandably explains why man-made noise is such a significant threat to many animals. The clip also suggests ways in which underwater noise pollution can be effectively reduced.

"With this video, we seek to convey that noise pollution in the ocean is a serious problem that concerns everyone. We are all part of the problem. Fortunately, by increasing our awareness and acting more responsibly, we can also be part of the solution," says project manager and bioacoustics specialist Dr. Michael Dähne.

The Antarctic Treaty was signed by twelve states on 1 December 1959 and came into force on 23 June 1961. The primary goal of the treaty is to protect Antarctica‘s unique environment and it’s first article states that “Antarctica shall be used for peaceful purposes only.” Scientific, economic and tourist activities in the region that emanate from Germany must be approved by the German Environment Agency. The "Hearing in Penguins" project is supported by the German Environment Agency with funds from the Federal Ministry of Environment, Nature Conservation and Nuclear Safety (BMU) and seeks to draw attention to the global problem of underwater noise. The aim is to inform the public and create awareness concerning the manifold effects of noise pollution on marine animals. 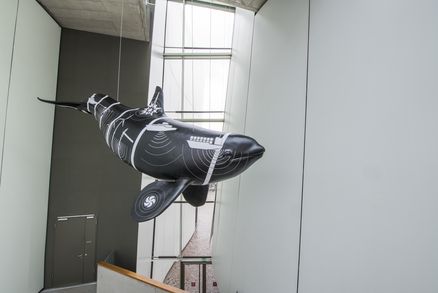 With the special theme „Not a silent ocean“, the German Oceanographic Museum presents the causes and consequences of the problem of underwater noise.