In the Antarctic, penguins are exposed to extremely loud environmental sounds such as powerful storms or glacier calving, but also to more quiet sounds such as the vocalizations of their chicks or the distant sounds produced by large marine mammals underwater.

In the research project ‘Hearing in Penguins’ the listening comprehension of penguins is investigated. As part of the project, penguins are trained at the OZEANEUM Stralsund, the Odense Zoo in Denmark and the Marine Science Center in Rostock.
Like in hearing tests, the animals learn to indicate when they have heard a sound signal on land and are rewaded with fish. Afterwards they do this task diving underwater.

The study 'Hearing  in Penguins' is funded by the German Environment Agency (UBA) with means of the Federal Ministry for the Environment, Nature Conservation and Nuclear Safety (BMU).

This year Dr. Michaël Beaulieu is going to Antarctica again. His stay at the Durmont d´Urville (Adélieland) research station in eastern Antarctica will last about three months.

His colleague and project collaborator Helen Rößler will also be in Antarctica in December. In the west, on the other side of the continet, she observes various penguin species and follows on from the results of Beaulieus expedition in 2018.

Dr. Michaël Beaulieu started his expedition in the beginning of November and send us his first report on the 22nd November 2019:

'I have now been on the French polar station Dumont d'Urville for more than two weeks.
First, i've travelled to Hobart in Tasmania, before taking a flight to the Italian station Mario Zuccheli. We stayed there for a night before flying over the White Continent to Dumont d'Urville, the French station. We have then been quite busy preparing the season working on Adelie penguins. We identified more than 100 pairs in order to follow them across their breeding season. We also equipped females with recorders and GPSs to monitor their foraging behaviour at sea. Now almost all females have laid their two eggs and have left for their first foraging trip at sea. I had to adjust the settings of the microphones I want to use to record penguin vocalizations, as the microphones were first overwhelmed by the intensity of these sounds (Adelie penguins are very loud). I will start recording vocalizations in a few days just before the females are back from their first foraging trip at sea and for the rest of the breeding season. Attached some pictures giving an impression of the atmosphere here.

'Since the beginning of the austral summer, we have been following more than 100 pairs of Adelie penguins in order to know their phenology (reproductive sequence: courtship, egg laying, incubation, hatching, guarding stage, creching).

Among all these nests, I have selected some nests for which I am monitoring their sound environment with microphones that are continuously recording (see picture). These microphones are very rugged (they survived winds reaching 180 km/h last week) but provide me with very high-quality sound recordings.
Now, we are reaching the end of the incubation period and the first chicks should hatch very soon. The storm we had last week broke most of the sea ice around the station. The first Emperor penguin chicks can therefore now easily reach the sea for their first swim.

The Australian ship 'Aurora Australis' also reached the station last week to bring the new overwinterers and to bring back the previous ones to Australia. The population on the station has completely changed.'

In the beginning of the new year Michaël Beaulieu reported about the harsh weather conditions in Antarctica:

'I will not be back in Stralsund until the beginning of February. The ship between Antarctica and Hobart is a little late. In the appendix, 2 pictures showing the current situation in DDU. After a strong storm (wind up to 170 km/h) for New Year's Eve, the sea ice around DDU has disappeared. This is very convenient for the Adelie penguin parents, who are supposed to bring more and more food from the sea for their offspring. The chicks are getting bigger and bigger and are now starting to become independent. When both parents are away, the chicks make small groups together, called 'creche' (like kindergarten) to stay warm.'

As part of the research project 'Hearing in Penguins' Dr. Michaël Beaulieu travelled to Antarctica in 2018 to investigate the hearing of different penguin species and to create an inventory of the environmental sounds experienced by penguins both in the air an underwater.
He spent four weeks on the Antarctic Peninsula collecting information on three penguin species, travelling through eight colonies and recording over 500 minutes of sounds.

On December 12th, Dr. Michaël Beaulieu, project coordinator of the research project 'Hearing in Penguins' in Stralsund, will start his journey to Antarctica. From Germany, he will first travel by plane to Ushuaia in Argentina before reaching the Antarctic Peninsula by boat. This exploration tour was indeed made possible by 'Quixote Expeditions' owning the sailing vessel 'Ocean Tramp' built for high latitude seas, and bringing every austral summer tourists and scientists from South America to the Antarctic Peninsula. Such a journey requires a thorough preparation for the scientist regarding the equipment to bring. Among other things, his equipment includes cameras, microphones and a hydrophone in order to conduct sound recordings in the air and underwater. Such relatively small devices fit perfectly well onboard “Ocean Tramp” where space is obviously limited. Because this expedition will occur during the austral summer, Dr. Michaël Beaulieu will not have to undergo excessively low temperatures but rather temperatures expected to range from -5 to 5ºC.

Dr. Michaël Beaulieu has been in Ushuaia since 14 December and is preparing for his start in Antarctica:

„I have now been in Ushuaia for two days and the town is wonderful, even though there are (too) many tourists. I went to 'Ocean Tramp' this morning and discovered where I will leave in the next weeks and with who. As you can see from the pictures, even though space is limited, the boat is well equipped and comfortable. People on board are from different countries (UK, France, Germany, Israel and US) and are all very nice. We now have to wait for the wind to calm down before we can leave (hopefully tomorrow). 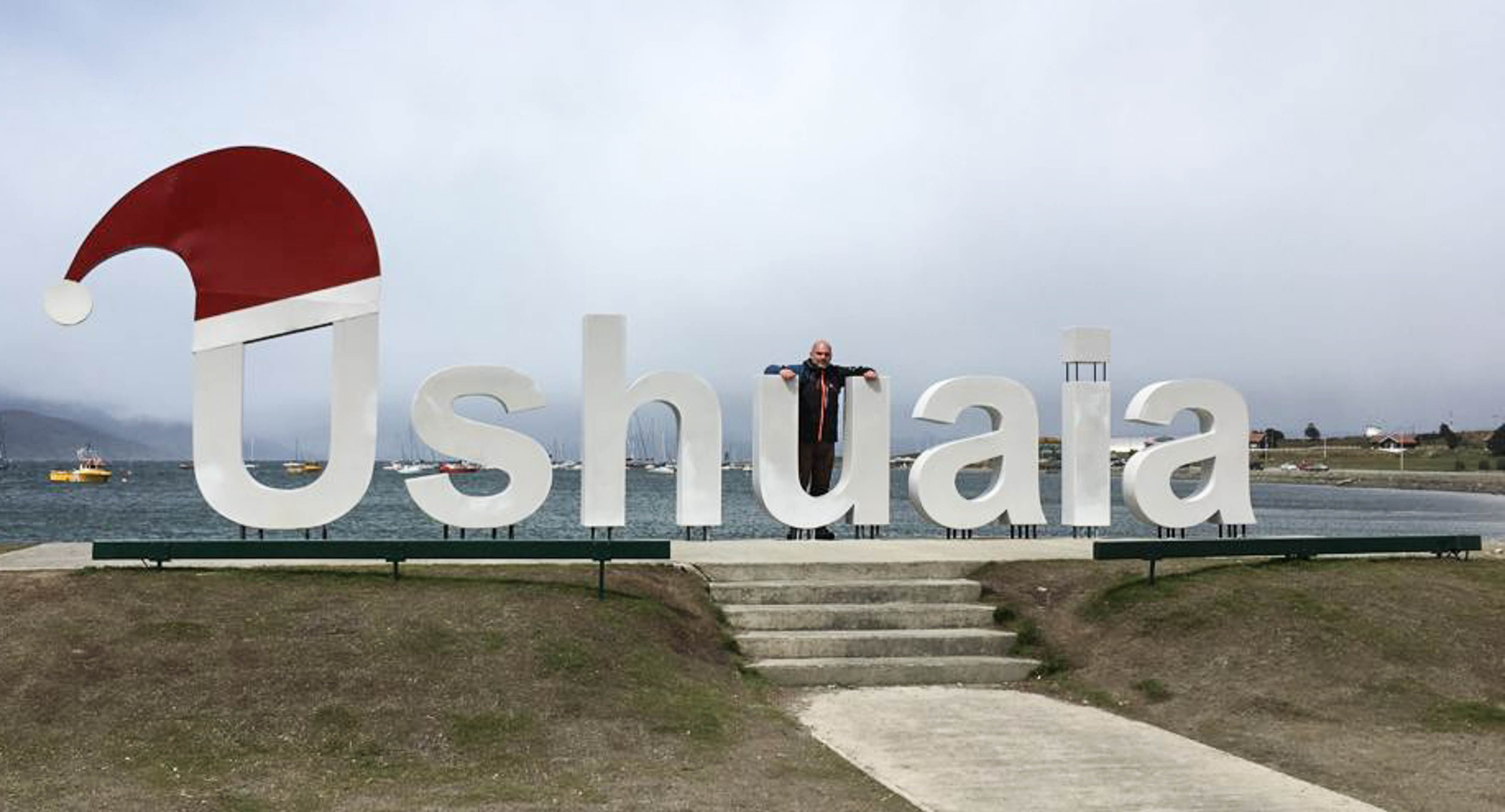 After four days at sea (and of seasickness) between Ushuaia and Antarctica, Dr. Michaël Beaulieu finally arrived yesterday morning (22nd December 2018) in the Archipelago of Melchior Islands in a foggy and mysterious atmosphere.

„Everybody on board is relieved. A first chinstrap penguin was already waiting for us on a small rock close to the boat. However, this was the only penguin we saw, as the place ist mostly inhabited by crabeater and Weddell seals, Antarctic terns, shags and kelp gulls. I tried to make some sound measurements underwater with my hydrophone while we were going out on the zodiac but could not detect any sound in the shallow waters surrounding Melchior Islands. This place is still a peaceful place for animals living here, although two other small sailing boats have also anchored here for the night,

We are heading today to Port Lockroy where we should see our first colony of gentoo penguins.

Greetings to Germany and happy Christmas!“

After celebrating Christmas on board Ocean Tramp, Dr. Michaël Beaulieu is now travelling from spots to spots along the protected East coast of Anvers Islands:

„Two days ago, we tried to go further than 65° South but the passage was stuck with ice and we had to go back to the North.
With the help of the passengers, I have also started to record penguin vocalizations close to Cuverville Island, Brown Base and Port Lockroy. For the moment, I have mostly recorded vocalizations of Gentoo penguins and of some Chinstrap penguins breeding in the same colonies as Gentoo penguins. I am now looking forwards to conducting measurements on a colony of Adelie penguins. Gentoo penguins are now starting to have chicks but most of them are still incubating.

We have also seen humpback whales (verry quickly) and leopard seals on sea ice but no orcas yet.

We have also visited the UK heritage Antarctic station Port Lockroy to see the conditions under which the Brits overwintered 60 years ago. We are now sailing North between Anvers Island and Wiencke Island.“

The voice and the behavior of the three species is strikingly different with the Gentoos being more relaxed and more melodious while the chinstraps are more aggressive and sing with a more metallic voice. Adelies are in between. It is also amazing to see how the three species share the same islands to breed, and altogether form an orchestra playing a loud and more or less harmonious concerto.

After several unsuccessful attempts, I was also finally able to record the voice of singing humpback whales swimming around the boat. This was an amazing moment that I could share with all the passengers of Ocean Tramp. We have also seen a group of orcas, but they were too quick to measure their vocalizations.

Yesterday, we had the opportunity to visit the Chilean Station O’ Higgins with the highest level of hospitality from our hosts, before celebrating new year’s eve onboard Ocean Tramp.

We are now leaving the white continent by crossing the Bransfield Strait to reach the South Shetlands tomorrow.“

„We have reached the South Shetland Islands after crossing a very quiet sea. The landscape is here more and more sub-antarctic, as the rocks surrounded by ice become more and more present and they are even sometimes covered by colorful moss and lichens.

Penguins are still present and I was able to record again their vocalizations on different colonies. After one day in Yankee Harbour and a night close to Half-Moon Island, we then followed the South coast of the South Shetlands to reach Maxwell Bay. We were expected to fly back to South America from there the next morning. However, the lack of visibility due to a thick fog prevented the plane from landing on time.
This is how Antarctica is: unpredictable.

After waiting the whole morning on the boat and almost two hours outside in a chilly atmosphere, the weather finally became clearer and the plane could land. It was time to say goodbye to Ocean Tramp and its crew, and to the few chinstrap and Adelie penguins present there.

The flight between Maxwell Bay and Punta Arenas was surprisingly short (ca. 2 hours) compared to the four days we had to spend on the boat between Ushuaia and Antarctica. Given the rough waves that I could see from the plane, I was happy to fly back and not sail back to the civilized World.

Now, I will stay some days in Punta Arenas before flying back to Germany. However, I am not entirely done with penguins: I will go tomorrow to a colony of Magellanic Penguins located on Magdalena Island, not very far from Punta Arenas.

See you soon in Germany!“

Since his return from Antarctica, Dr. Michaël Beaulieu is now working on the data he collected:

'In the almost-four weeks I spent in Antarctica I met amazing people, recorded many environmentaln sounds and discovered the impressive landscapes of the Antarctic Peninsula.

I am amazed by the diversity of the fauna and the landscapes I encountered (huge glaciers stuck between steep mountains and flowing into the sea were perhaps the most impressive).
I am also happy to see how many data I was able to collect in such a short period of time while being onboard a sailing boat. In total, I was able to record more than 500 minutes of penguin vocalizations, visited 8 penguin colonies and collected information about three penguin species.

Now I am back in Stralsund and will, with the help of my PhD student Helen Roessler, analyse the data. Before I travel back to Antarctica in November, much work remains to be done.' 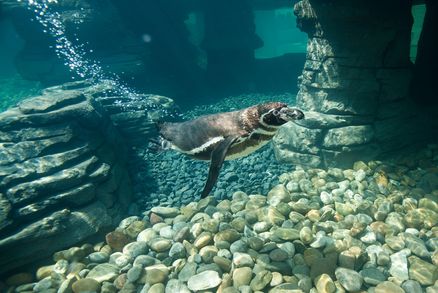 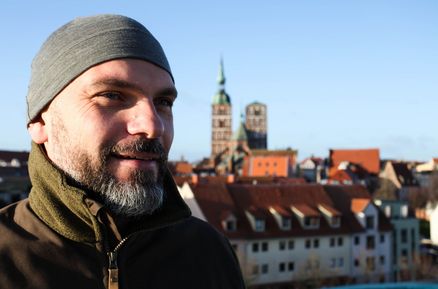 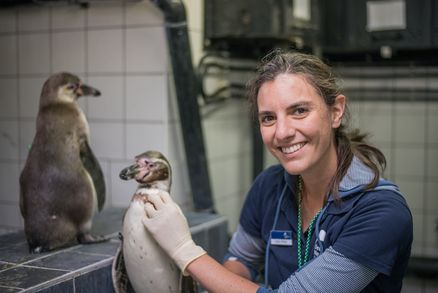